London Archaeologist's Annual Lecture and General Meeting will be online this year, with the AGM at 7pm, followed by the Annual Lecture.

For this year's Annual Lecture, Stephanie Ostrich will present Heritage Action Zones: heritage-led regeneration in London's historic high streets. Heritage Action Zones (HAZs) have been rolled out in four phases over the last few years: the first Greater London HAZ was Sutton in Round 1; the first inner London one was Walworth as part of Round 2. This is a particularly fitting subject where Covid has taken its toll on all the country's high streets.

The short AGM will commence at 7pm, followed by the Annual Lecture and will take place on Zoom. Register using the button below to receive the link to join beforehand.
Register your place 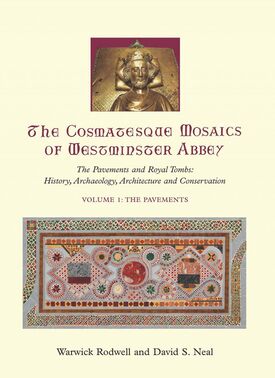 The judges described the winning volumes as “A fascinating multi-disciplinary recording and analysis of a complex of internationally important monuments. Despite the copious detailed recording, written in a clear and scholarly fashion, with some neatly turned, if not pithy, phrases and insightful analyses.”

There were nine nominations for the prize in 2020, it was a strong field with excellent entries,  as one of the judges said: “There were so many good and important books…, it was difficult to choose.”

The nominees for the prize in 2020 were:


Congratulations to the winners! 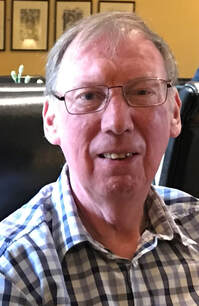 Alastair Ainsworth (1947‒2020)
It is with great sadness that we have to report the death of Alastair Ainsworth, Treasurer of London Archaeologist. He died suddenly in May at the age of 72. During his professional career he worked as an accountant and company secretary and was an Associate of the Chartered Institute of Management Accountants. He took early retirement to pursue his real passion for archaeology and having studied archaeology at Exeter, he chose to assist various archaeological societies. He was elected to the London Archaeologist Treasurer post at the AGM in May 2007.

As a member of the Publications Committee, he contributed various book reviews stating modestly in one that he was a 'general reader with an interest in archaeology' but he was more than - he was especially interested in the Iron Age and spent much of his time investigating Iron Age hillforts.

He was not only conscientious, resourceful, helpful and thoroughly professional but was also happy to pitch in with LA activities. Unassuming and self-effacing, he often said that he preferred to say as little as possible at AGMs or Committee meetings as he thought people weren't that interested in accounts, but without his knowledge and skill, LA would not be as financially healthy as it is today.  We have a lot to thank him for and his expertise and cheerful manner will be much missed.
Watch the Annual Lecture 2020
The video of Adam Corsini's talk, Layers of London: Putting archaeology on the map is now available to watch on our YouTube channel. Many thanks to Adam for his presentation on the fantastic Layers of London project. 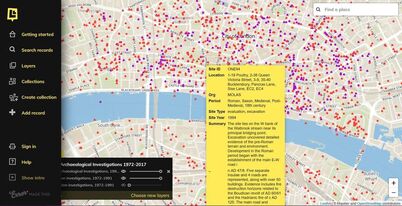 We've had an overwhelming response to this event, and the virtual lecture is now fully-booked. But don't worry if you weren't able to get a place, we will record it and share the video on our website and social media. Full details will be in the next edition of London Archaeologist.

As we're unable to hold our Annual Lecture and General Meeting in person this year, we delighted that Adam Corsini from Layers of London is able to give his talk virtually instead.

The 2020 Prize
Closing Date
Nominations must be received on or before 11th May 2020.

Judging
Entries will be assessed by a panel of judges appointed by the Publication Committee of London Archaeologist.

Procedure
As well as providing their own contact details, the nominator(s) should name the publication and publisher and give a brief explanation (100 words max) of why they believe it is worthy of the Prize. It would be helpful, but not essential, to use the standard nomination form. Note that there is no need to provide copies of the publication at this initial stage. The judges will agree a short list from those nominated and will then ask publishers for copies. Copies will be returnable on request. 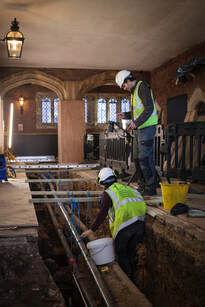 Annual Lecture announced: Keeping the lights on at Hampton Court Palace
Thursday 16th May 2019 -- Institute of Archaeology, 31-34 Gordon Square, London WC1
Guy Hunt of L - P : Archaeology and Daniel Jackson of Historic Royal Palaces will be revealing the results of the first two of five phases of works to replace hundreds of metres of electrical cabling within the scheduled monument of Hampton Court. Required to support the future use of the building as a heritage attraction, the ring main replacement project also entails a multitude of archaeological interventions. This rare and challenging opportunity to excavate in and around the buildings is revealing earlier phases of the building -- both expected and unexpected.
As usual, the Annual Lecture is preceded by a wine reception, and London Archaeologist's short Annual General Meeting. All are welcome and it's all free of charge.
6.30pm: wine reception (please RSVP for catering purposes)
7.00pm: London Archaeologist AGM, followed by Annual Lecture
Do feel free to circulate the flyer with details of the event. 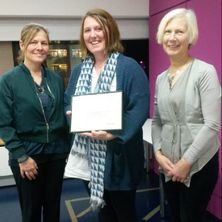 Publication Prize 2018
The winner of the 2018 London Archaeological Prize, familiarly known as the Publication Prize, was announced to a packed London Archaeological Forum at the Museum of London on 19th November.
Al Telfer (on the left in the photo), one of the panel administering the prize, announced that one publication stood out from all others, with high praise from all the judges: An Immense and Exceedingly Commodious Goods Station: The Archaeology and History of the Great Northern Railway’s Goods Yard at King’s Cross, 1849 to the Present Day, by Rebecca Haslam and Guy Thompson of Pre-Construct Archaeology. A certificate and cheque for £250 was presented to a 'delighted' Rebecca Haslam (centre) by Cath Maloney (right), formerly of the LAARC and one of the four judges.
Two other publications received honourable mentions:  The Deptford royal dockyard and manor of Sayes Court, London: excavations 2000–12 by Antony Francis of MOLA, and John Schofield's St Paul's Cathedral: Archaeology and History. The full shortlist, with comments from the judges -- John Lewis, Cath Maloney, John Pearce and Signe Hoffos -- can be found here.
Look out for an interview with the winning authors, Becky and Guy, in the spring issue of London Archaeologist, to find out how an outstanding publication of such a complex site can be put together successfully. 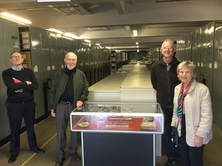 Golden Ticket winners on tour
Two Golden Tickets – we’re placing them in 10 or so subscribers’ magazines each quarter – gave the winners and their guests a great time at the Museum of London Archaeological Archive on 4th May.  Curatorial Assistant Dan Nesbitt, gave them a behind the scenes tour and the chance to handle some unique treasures. According to the winners Mike Hacker (left) and Malcolm Tucker (second left), they and their guests found it ‘a complete eye opener’. Dan will be repeating the tour in the autumn for two more Golden Ticket winners. Subscribe now to be in with a chance for this and lots more, from publications to merchandise to free conference tickets. 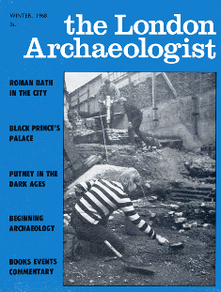 Back issues free online
Every London Archaeologist published from the first issue in 1968 pictured here through to autumn 2015 can be accessed free on the Archaeological Data Service – ADS. It’s an amazing resource for researchers, and browsing through early issues offers a fascinating look at how archaeology has changed. Only members and purchasers of individual issues have the magazines published in the last two years, but four back issues are posted online by ADS once a year. The next upload is due in the autumn and will include winter 2016 through autumn 2016, and the annual Round-up supplement detailing all the archaeological work undertaken across London in 2015.